HISTORY OF THE UNIVERSITY LIBRARY

The present Cebu Normal University Library started as a School Library. Its first location was in Colon Street, Cebu. It occupied a rented space in Colegio Logarta Building in June 1902.  On this same date the school was established as a provincial branch of the Philippine Normal School. Upon the establishment of Cebu Provincial High School (CPHS), it served as an adjunct. Originally, the library catered only to two-year secondary normal curriculum students for third year and fourth year.

In 1924, the new school building was opened which included a high school from first year to fourth year. Before World War II between 1930-1941, the head librarian was Mrs. Catalina Alfafara (Nemenzo).

In 1990, a three-story library building was built under the administration of Dr. Jaime Gellor. In 1994, the undergraduate library was transferred to the 2ndfloor of the new library building. The old library at the Administration building became the Graduate School Library. In 2010, the Graduate and the Undergraduate Collections were merged in order for users to gain more access to the library collection.

In 2016, the University Library has been an essential source of information geared to support the academic, instruction and research needs of the university. It has a total book collection of more than 50,000 volumes. The collection includes Print (books, periodicals, theses and dissertations) and Non-Print (AV-Materials, e-journals, e-books and online theses and dissertations).  It occupies the 2nd and 3rd floors of the three-story library building with a total seating capacity of 845.  The second floor has an area of 784 sq. m. while the 3rd floor has 936 sq. m. The 2nd floor library housed the Office of the Head Librarian, Circulation, Reserve, Filipiniana, Reference, Technical and the Graduate Studies Section.   The 3rd floor library housed the E-Library, Periodicals, Special Collections and General Reference Section. 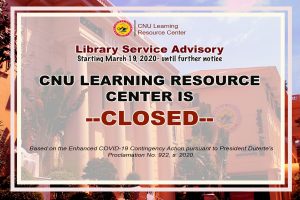 How to use the Online Public Access Catalog (OPAC)